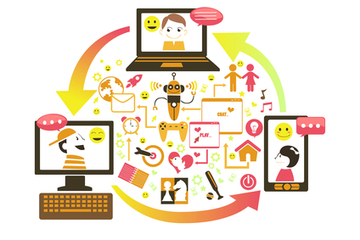 Before everything Internet-related became known as digital, we called it interactive. Campaigns lived on Web, mobile, and video platforms ideally suited to engaging ads, and brands were eager to experiment.

While these channels seemed predisposed to interactivity, many an ad failed to engage. The tools we used had the potential to be interactive… but the way in which we used them sometimes fell short.

Social media changed that; in marched a group of applications built on user interactions. Suddenly, deep and meaningful interactivity was no longer a happy byproduct, but a requirement. Communication, collaboration, and cooperation became the gold standard for marketing online. Now, when we set out to create a digital experience, whatever platform it uses or form it takes, it’s built on and around sharing.

The result of our long and complicated history with interactive media is that brands, publishers, and ad developers are keener than ever to push the boundaries of interactivity online. Here’s a peek at what’s been cooking in digital interactive campaigns.

The Times is On It

This year has been a big one for The New York Times as far as their online ad innovation goes. In April, the company ran a home page takeover for Prudential that allowed users to view the front page of the newspaper as it looked on the day they were born.

Users were able to share their personal front page on LinkedIn and Twitter. The campaign linked to Prudential’s bringyourchallenges.com microsite, with an equally interactive mix of online films and polls related to planning one’s financial future.

Expandable banners have long been praised for their ability to boost interactivity and increase the advertiser’s useable space, and this one made good use of the format’s dual strengths. Sponsored by Bank of America, the “Schools for Tomorrow” conference appeared as a live feed surrounded by branding, but the banner also included a secondary, user-initiated video from Bank of America.

With their uber-interactive touchscreens, smartphones and tablets are a preferred choice of advertisers looking for a high level of engagement from target customers. As of this year, brands have at their disposal a new crop of mobile units to power their campaigns. This past summer, the Interactive Advertising Bureaulaunched its Mobile Rising Stars formats in an effort to increase user engagement with mobile ads. According to the IAB, Vibrant Media, and comScore, which together conducted a study on ad effectiveness, the new units are seeing higher interaction rates than standard mobile banner ads.

The summer also marked the arrival of a new collection of tablet ad formats from The New York Times, also created with greater interactivity in mind. Within the company’s iPad app, advertisers can now deliver in-app media and coupon downloads, while consumers can swipe and “wipe away” brand messaging and replace it with new imagery, to control the flow of ad content.

eMarketer recently reported that only 10 to 20 percent of video ads contain an element of interactivity, but this number has doubled since 2012 and is expected to double again next year. Social sharing buttons, ad selector formats, and actions that initiate further content are all useful for upping user interaction.

That said, interactivity can also take place beyond the video player, as it does in Heineken’s current YouTube campaign.

The brand recently launched a “social experiment” called Departure Roulette that gave random airport travelers an opportunity to drop everything and fly to a surprise destination. After airing footage of the event online, Heineken turned to social media to seek out consumers who were actively engaged with the branded concept.

“What if you saw a video of travelers dropping everything to fly to places unknown? And what if you commented online that, if given the chance, you would too?” These are the questions Heineken asks in the second iteration of its campaign: Departure Roulette En Route.

Consumer-brand interactions became fodder for additional video content, and Heineken is running the resulting videos as pre-roll ads and on its dedicated YouTube channel. It has already racked up over 5.7 million views and plenty of comments from additional viewers, who claim they’d jump at the chance to be #dropped.

We can call it digital all we want, but at its core, modern media is interactive. Shouldn’t our campaigns be, too?