Home › Digital Advertising › The Future of Advertising: ‘Pay-Per-Gaze’ Is Just the Beginning

The Future of Advertising: ‘Pay-Per-Gaze’ Is Just the Beginning 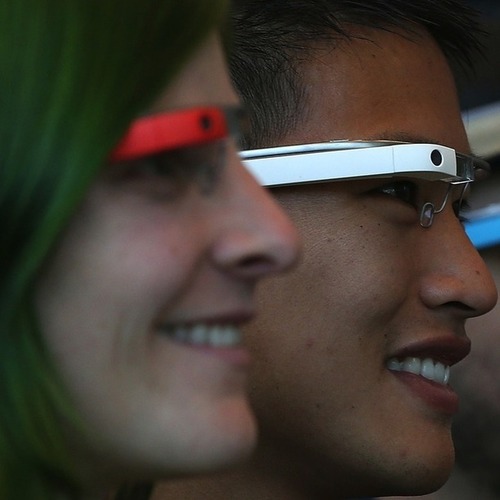 Advertising is going to change more in the next 20 years than it has in the last 100. If you need proof of that, just look at the patent Google was granted Thursday for a Google Glass-based ad system.

Dubbed “pay-per-gaze,” the content would charge advertisers for the number of times someone literally looked at their ad. The concept is buried pages deep in a patent for a “gaze tracking technique … implemented with a head-mounted gaze-tracking device that communicates with a server.”

It would likely make money hand over fist, and is clearly the main future-focused impetus for the patent. But it’s far from the only one.

What is this head-mounted gaze-tracking device of which they speak? “Eyeglasses including side-arms that engage ears of the user, a nose bridge that engages a nose of the user, and lenses through which the user views the external scenes, wherein the scene images are captured in real-time,” says the patent. It never uses the word Google Glass — but if someone can explain to me the difference between that device description and Google Glass, I’d love to hear it.

So to recap: the world’s largest search engine was just granted a patent for the most sticky form of advertising possible — ads that literally flash in front of your eyes. Google gets paid when it can ascertain that your pupils pointed in that direction, and for how long. And all of this on the device it is currently seeding among the influencers of the tech community.

In other words, Google Glass is going to bring a whole new meaning to “made you look.”

Now it’s Google, so they’re likely to be smart and subtle about it. It’ll start by offering an extra layer of reality-augmented ads when you’re looking at specific Glass-friendly billboards. Hey, it was obviously an ad, and you looked at it, so you must be interested.

You know advertisers will pay for this sort of high-tech gimmick as an add-on to their campaign; it’s an easy way to look hip and gain media coverage without spending all that much on the test-bed target audience.

At this point, depending on the reaction to phase one, local advertisers may get interested. You may start to see menus pop up in restaurant windows, and the restaurant pays if your eyes linger over a given menu item.

Either way, this is all just a prelude to phase two, in which the Google Glass camera will intensify its gaze on you.

Phase two, as described in the patent, will be pay-per-emotion. If the ad can make your eyes dilate — say, a picture of a particularly delicious slice of pizza in a restaurant window, or a racy Gap ad — the advertiser pays more.

“Pupil dilation can be correlated with emotional states, (e.g., surprise, interest, etc.),” the patent helpfully reminds us. And it’s simplicity itself for a camera that’s tracking your gaze to track the size of the gazing subject’s eyes.

The Far Future of Advertising

This is exactly the sort of thing that made William Gibson quit writing science fiction. We seem to be entering an era where tastemakers are willingly accepting augmented advertising that is flashed on their eyeballs by the world’s most technically advanced multinational. That’s more cyberpunk than most cyberpunk.

So let’s get ahead of the game and speculate in even more outlandish sci-fi ways that are already technically feasible. If Google Glass advertising is smart and successful enough, if it gently overcomes the creepiness factor with the glories of convenience, what next?

Well, we already have prototype devices that can read and translate your electromagnetic brainwaves, believe it or not; you can literally think instructions to them. You can be as precise as thinking of a particular number or letter, and the device can read them; this was shown in experiments as early as 2000.