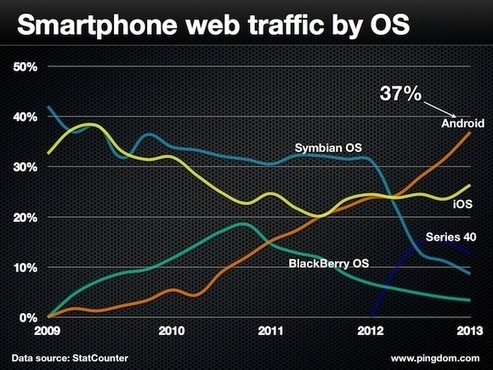 Last year, sales of smartphones reached to all time highest. At present, Android is accounting for 42% of all consumer computing devices. During the entire last year, number of changes were seen in smartphone segment; even software giant Microsoft also jumped into hardware manufacturing. Indeed, it’s quite interesting to know the smartphone market share trend in 2012. By the end of last year, Android accounted for 37% of entire smartphone web traffic, followed by iOS and Series 40. It’s important to know the smartphone web traffic because it shows actual use of internet on smartphones.

More importantly, Android was unilaterally dominating across top smartphones markets including the U.S., U.K., China, Japan and South Korea. Interestingly, in Japan, 90% of smartphones sold in 2012 were Android, while in China, the OS accounted for 67% of smartphone market share in terms of shipments.